Cristiano Ronaldo’s girlfriend Georgina Rodriguez turned up the heat when she arrived at the 75 th Venice Film Festival by water taxi on Wednesday.

The 24-year-old looked incredible as she blew kisses to the crowds while wearing a very sexy blue dress by Twinset Milano, which had a thigh-split going up the front.

Posing with one hand on her hip, her outfit had a chic one-shoulder detail and the model appeared happy and confident as she worked her magic in front of the cameras.

The 24-year-old brunette beauty and mother of one flashed her ample cleavage and hot leg in the strapless ballgown, which featured a lacy black bodysuit and a racy semi-sheer lace skirt.

The mother-of-one completed her look with a pair of nude strappy sandals as she posed for photos on the red carpet.

Her raven tresses were styled in loose vintage waves while her pretty features were enhanced with smoky shadow, fluttery lashes and a slick of rose lipstick.

She continued to wear a sparkling ring, on her wedding finger, which first sparked engagement rumours in September 2017.

The couple are also parents to 14-month-old twins Eva Maria and Mateo, born via a surrogate, as well as eight-year-old Cristiano, Jr.

Her outing comes after her boyfriend signed for Juventus in a transfer worth £99million, the highest fee ever paid by an Italian club. 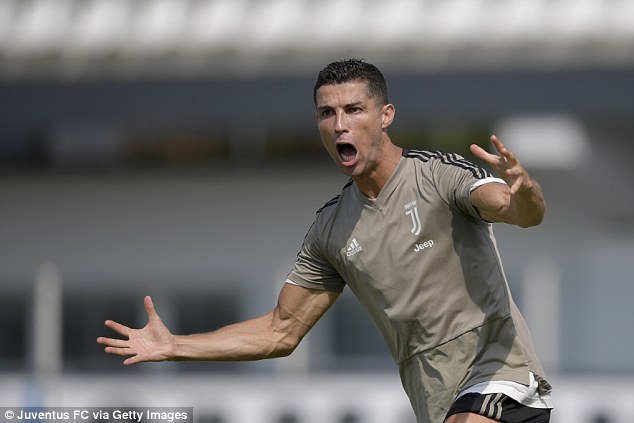 The Portugal international has created quite a stir since making his move to Italy and is making waves for the Italian league itself.